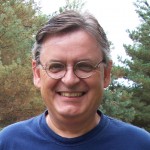 When I agreed to fill in as the summer, weekday editor of Blog for Iowa, the decline of newspapers, and substantial changes in corporate media was on my short list of topics to cover.

As I drove to town yesterday, people were collecting their copies of the Cedar Rapids Gazette from the roadside drop boxes. How long they will continue to do so is an open question. Newspaper publishing is a dying industry with 28.6 percent of newspapers closing since 2000. (See Harry Bradford’s article on Huffington Post here).

The Internet is becoming the pipeline for news, information and other content in a way none of us recognized as we first logged in on home computers back in the 1990s. These days, many people I know don’t even own a television set, much less subscribe to a newspaper or to cable TV.

A lot has been written about the decline of newspapers and most readers have probably seen this chart: 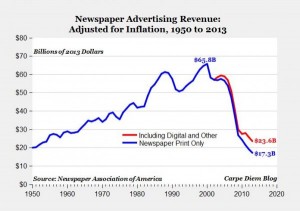 “The dramatic decline in newspaper ad revenues since 2000 has to be one of the most significant and profound Schumpeterian gales of creative destruction in the last decade, maybe in a generation,” wrote Mark J. Perry in the Carpe Diem Blog. “And it’s not even close to being over.”

Things have gotten so bad that newspapers have stopped publishing the quarterly results used to make this chart, favoring annual reports. What does that mean? More newspapers will consolidate or go out of business, leaving less writing jobs for those who need it as paid work.

How does Blog for Iowa fit in? As you can see at the bottom of the front page of the blog, we have a benefactor. “Blog for Iowa is paid for privately to the tune of $15 a month by Dr. Alta Price of Bettendorf, Iowa,” it says. As long as people want to work for beer money or less, there will be plenty of opportunities to write. Not that we want to encourage readers to go elsewhere, but just look at the WordPress Freshly Pressed site. There are tens of thousands of well written blogs and those blogs exist and need writers, even if most of them are not for profit.

The point is the world has changed and is changing, and one of my topics this summer will be occasional posts about the changing media and our role in the new world it is creating. Watch for my summer “Friday in Iowa” series to be posted irregularly on Fridays until Labor Day.

Special thanks to my colleagues at Blog for Iowa, Trish Nelson, Dave Bradley, and especially to Dr. Alta Price for making it possible for me to write at Blog for Iowa this summer.