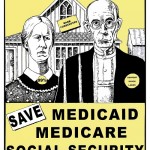 Every time I hear the word “entitlement” in connection with Social Security or Medicare I want to grab the fool who is using Frank Luntz’s word by the collar and ask him (or her) just how stupid they are. Do they not understand how insurance works? Do they not understand what insurance of the whole is? These programs are insurances against the ravages of old age. I am one of those people who can still remember old folks avoiding doctors because they could not afford the bill of the insurance. Medicare was a great benefit to them that allowed them to live their golden years in dignity.

Neither Medicare nor Social Security are in real problems, just the kind of problems that Republicans like to create and then claim that the programs are going under. Last I saw, Social Security was predicted to be fully funded until 2042 which is a much longer life than it was ever predicted to last in previous eras. And SS has never contributed one cent to the national debt. Even Ronald Reagan knew that. Next time a Republican claims SS is the cause of the deficit, he (or she) needs to be asked to explain how that could be.

Medicare also has had a long life predicted, but not as long as Social Security. One of the biggest reasons is that when Medicare Part D – the drug benefit – was put in, for some strange reason the Republican majority that passed the bill had a provision that Medicare pay the highest possible bill for the drugs they would buy through the program. Let me say that another way – lawmakers forced the federal government to pay the highest possible prices rather than the usual directive to put out bids on materials they buy.  Best sources I could find place the cost of this directive to pay the highest possible price costs Medicare about $25 Billion per year. That’s a lot of doctor’s visits and hospital service that could be paid for. But more importantly that is a huge waste of taxpayers money.

Using costs that our same government incurs through another program known as Tricare – a program that negotiates prices – for the very same drugs it appears that Medicare overpays by 40% to 60%. (Also cited here) So if we were to use 50% savings on a near $50 Billion per year price tag, we would get a nice $25 Billion/year savings. Over 10 years that is a nice quarter of a Trillion dollars ($250,000,000,000).

I have been paying into Medicare as an insurance policy from the day it started. I don’t feel entitled anymore than when someone who has private health insurance expects that insurance to pay when a health crisis pops up. They are the same thing. But this deal where a corporation gets a HUGE overpayment because they are in the right business, that stinks. My guess is that that money is used for important things like “campaign contributions.”

I would love to see someone in the Iowa delegation, maybe such fiscal tigers as Chuck Grassley or Steve King, step up and grab this opportunity to do the right thing for our country and stop this foolishness. Senator Grassley, Congressperson King – can you step up for us and demand an end to this entitlement to the drug companies?

1 Response to The Real Entitlement