Posted on August 7, 2012 by bfiaedflaherty 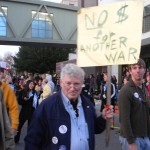 On August 7, 1964, the US Senate voted 88-2 to approve the Tonkin Gulf Resolution, which was then used as the legal justification for the Vietnam War. Two senators, Morse & Gruening, had the courage to say no. They should be honored as heroes. The resolution was based on lies and pretense – history is clear on this. 58,209 US soldiers died, along with over a million Vietnamese.

We should not have to repeat history, but the War in Iraq was eerily similar. The October, 2002 authorization for that war was also based on half-truths and deliberate manipulation of faulty intelligence. We know there were no WMD’s, we know there was no connection with 9-11.On September 14, 2001, Congress approved the War on Terror, which included the war in Afghanistan, with only one dissenting vote, from Barbara Lee.

We are having the same success with this war, after almost 11 years, as we had in Vietnam and Iraq.

It may be worthy to note that the largest demonstration in empathy with the US after the terrorist attacks on September 11, 2001 was in Tehran, Iran.  Iran immediately offered its support to the US in the effort against Al-Queda.  However, George Bush found it expedient to declare Iran part of the Axis of Evil. Now we have the opportunity to accept or reject the prospect of another war, against Iran.

Let’s end our war in Afghanistan and just say no to a war with Iran.  Speak to your representatives in Congress.