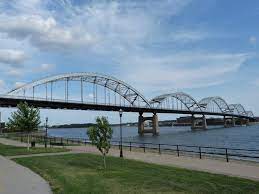 DAVENPORT, Iowa (AP) — Davenport’s 81-year-old Centennial Bridge across the Mississippi River creaks under the weight of tens of thousands of cars and trucks every day. Rust shows through its chipped silver paint, exposing the steel that needs replacing.

This city’s aging landmark is among more than 1,000 structurally deficient bridges in the area. The tally gives Iowa’s 2nd congressional district the dubious distinction of having the second-most troubled bridges in the country.

So, it struck some Iowans as strange when the district’s Rep. Mariannette Miller-Meeks voted against a bill that would pour more than $100 million in federal money to repair and replace bridges into southwest Iowa. Miller-Meeks objected to majority Democrats’ handling of the bill, never mentioning its contents, a common refrain from the minority that overwhelmingly opposed it.

If anyone in Iowa was surprised that the Republican would oppose money for a glaring local priority, few in Washington were. Strategists and onetime party leaders note it’s become so common for lawmakers to prioritize their party’s line over district needs that it’s hardly mentioned.