Are Progressive Media Companies On The Rise? 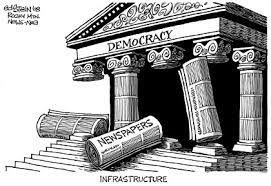 Grassroots progressive activists including Blog for Iowa, have been saying for some time liberal billionaires should invest in media. This is great news.

Why it matters: Good Information Inc. aims to fund and scale businesses that cut through echo chambers with fact-based information. As part of its mission, it plans to invest in local news companies.

The group will be led by Tara McGowan, a former Democratic strategist who previously ran a progressive non-profit called ACRONYM.

Details: Good Information is launching with a multi-million seed investment led by Hoffman and joined by investors Ken and Jen Duda, Incite Ventures, and George Soros.