Break In At A Nuclear Weapons Storage Facility 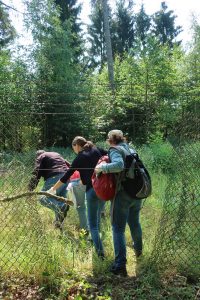 Yesterday, a group of peace activists gained access to a site on a German Air Force Base where 20 U.S. nuclear weapons are stored.

“The peace activists cut through razor wire and some other fences and several made it to the runway; three activists walked to a nuclear weapons bunker, and climbed up to the top where they were undetected for an hour,” according to the International Press Agency. “All 18 were eventually found by soldiers, handed over to the civil police, ID checked, and released from the base after 4-½ hours.”

One of the many jobs I had while serving in the Cold War Army was to standby in the event a nearby nuclear weapons storage facility suffered a break in or terrorist attack.

I was there when the Baader-Meinhof Gang, later known as the Red Army Faction, rose to prominence. I was stationed at a kaserne on the Rhine River during the “German Autumn” when Baader Meinhof and others committed murder, kidnapping, hijacking and more. Here’s a taste of what it was like where I lived from Wikipedia:

The German Autumn (German: Deutscher Herbst) was a set of events in late 1977, associated with the kidnapping and murder of industrialist Hanns Martin Schleyer, president of the Confederation of German Employers’ Associations (BDA) and the Federation of German Industries (BDI), by the Red Army Faction (RAF) insurgent group, and the hijacking of the Lufthansa airplane Landshut by the Popular Front for the Liberation of Palestine (PFLP). They demanded the release of ten RAF members detained at the Stammheim Prison plus two Palestinian compatriots held in Turkey and $15 million in exchange for the hostages. The assassination of Siegfried Buback, the attorney-general of West Germany on April 7, 1977, and the failed kidnapping and murder of the banker Jürgen Ponto on July 30, 1977, marked the beginning of the German Autumn. It ended on Oct. 18, with the liberation of the Landshut, the death of the leading figures of the first generation of the RAF in their prison cells, and the death of Schleyer.

Those were tense times. I remember German police cars on every corner and at every Autobahn exit during key moments in the drama that fall. Our unit was often on alert for potential response to an incident.

We were never called to secure a terrorist attack site. However, yesterday’s incident raises some questions about our deployment of nuclear weapons in Germany.

Why isn’t the United States working toward fulfilling our agreement in the Nuclear Non-proliferation Treaty (NPT) to eliminate nuclear weapons? Not only do we have a legal obligation, there is a moral imperative to do so.

Is Germany permitted to deliver U.S. nuclear weapons with their aircraft as part of NATO? Quoting from the article, “On this air force base, German pilots stand ready to fly Tornado fighter jets with U.S. B-61 nuclear bombs and could even drop them, on orders from U.S. President Donald Trump on targets in or near Europe.” Since Germany is not a nuclear state recognized in the NPT, it may be illegal for them to do so.

The incident at Air Force Base Büchel is not getting much press in the wake of today’s Donald Trump – Vladimir Putin meeting in Helsinki. Maybe it should.