Have You Blocked A Bulldozer Today? 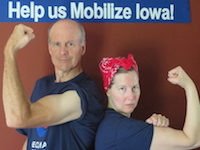 Update from Ed Fallon about the fight to stop the Bakken Pipeline.

I’ve always believed we could stop the Bakken Pipeline. I still believe that. As they say in the world of opera, it ain’t over til the fat lady sings — or in a more apt metaphor, til the crazy guy drinks motor oil.

Pipeline fighters are understandably anxious. The Iowa Utilities Board seems inclined to grant Dakota Access and its parent company, Energy Transfer Partners (ETP), a permit and the power of eminent domain. Yet even if that happens, we’ve got legal angles, legislative angles, and the compelling moral authority of standing with landowners to block the bulldozers.

But there’s another ally lurking in the dark shadows of Wall Street: The Market. Yes, capitalism itself might save Iowa from the scourge of an oil pipeline. Consider the following:

– ETP’s merger with Williams Companies last year has not gone well, with some indication that ETP wishes it could find a way out of the deal. The fact that ETP’s CEO, Kelcy Warren, says “we’re not going to talk about the Williams transaction,” only further confirms that the merger was a bad idea. (Provided by TheStreet)

– The sudden firing earlier this month of the company’s CFO, Jamie Welch, is another sign that things are not well in the ETP empire.

– There are also growing doubts as to whether ETP is on track with the capital it needs to launch the Bakken Pipeline: “ETP is evaluating project financing of the Bakken Pipeline. This measure would materially reduce the direct spending required for this project.” (See NY Times Business Day Markets.)

– Some of us have been saying all along that ETP’s claim that the Bakken pipeline is important for U.S. energy independence is bunk. Now Warren seems to agree, saying, “the amount of volume we are going to be moving to Mexico within — by 2018 is huge.” (Provided by TheStreet)

– Noted industry analyst, Jim Cramer, writes: “We have way too many oil pipelines in the country and the master limited partnership woes must stop and the bleeding be staunched among the independent oil and gas companies.” (See #5 of My Checklist for the Market to Start Making Money, Part 2.)

If Iowa Utilities Board members aren’t aware of these developments, they should be. If I was on the Board, the plethora of troubling news about ETP would certainly weigh my decision on their request for a permit.

If the Courts, the Legislature, and the Market fail us, we still have . . . BATS! That’s right. Bats. The northern long-eared bat is on the federal endangered species list, and from June 1 – July 31, you can’t down trees within 150 feet of where bats may be roosting. ETP denies Iowa is home to long-eared bats, but the Iowa Chapter of the Sierra Club insists ETP has not done a credible survey. There are certainly long-eared bats in the pathway of the pipeline in Lyon County, and quite possibly elsewhere in Iowa as well.

I once helped rural residents of Linn County stop a landfill that would have destroyed a beautiful bluff along the Cedar River. We fought that battle on every front we could. In the end, we won because of . . . SEAGULLS! Yup. Turns out the FAA won’t allow a dump within a certain distance of an airport because the gulls dining at the dump could find their way into an airplane’s engine at just the wrong moment.

So, we need to keep fighting to stop the Bakken pipeline. Regardless of what the IUB does next week, it ain’t over til John Grizzly guzzles himself senseless.

2 Responses to Have You Blocked A Bulldozer Today?