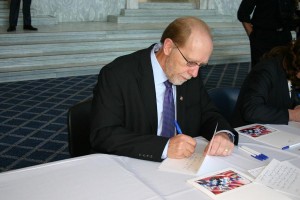 Unlike many in my cohort of grade school classmates, I stay in touch with my elected officials and have written them on important issues. Dave Loebsack is my U.S. Congressman, I like him, and it’s no secret. Loebsack receives his share of criticism, but I have stuck by him and will for three simple reasons: who he is not, who he is, and who he could be.

Dave Loebsack is not a Republican. His predecessor, Jim Leach was. I had a long constituent relationship with Rep. Leach. He was elected while I was in the military, and my first letter to him in 1980 was about disposal of radioactive nuclear waste during the nuclear freeze movement. Our views met on a lot of issues over the years. Two things turned me against Leach: his participation in the Kenneth Starr investigations during the Clinton administration, and his authorship of the Gramm-Leach-Bliley Act that repealed part of the Glass Steagall Act. Leach’s role as chairman of the House Banking Committee during Whitewater was the turning point, with repeal of Glass Steagall being the topper.

According to Bill Clinton, “in the House Banking Committee, Chairman Jim Leach… trumpeted every bogus charge against Hillary and me, alleging that we had made, not lost, money on Whitewater, had used Madison Guaranty funds for personal and political expenses, and had engineered David Hale’s SBA fraud. He promised ‘blockbuster’ revelations, but they never materialized.”

I thought it was a ridiculous waste of time that Leach participated in this political witch hunt, and told him so in a letter. By the time I got active in politics again, I felt Leach had to go, and thankfully wasn’t the only one.

Who is Dave Loebsack? His biography is readily available, but from the beginning of my relationship with him, he has been concerned, humble, appreciative and direct in his approach to me and to the political world. This passage from a March 25, 2005 email from Loebsack, in response to my questions about raising money for the campaign and gaining support of the political establishment, depicts what I mean:

“At the moment, I am quite honestly not sure that I can raise tons of money. However, I think my extensive contacts in the area, the state, and beyond give me a much better chance to do so than many past candidates. Therefore, I am trying even now to raise funds in this ‘exploratory’ stage. And I am not afraid to ask for help. Indeed, you may write me a check (to Loebsack Exploratory Committee) and I will deposit it in an account specifically set up for ‘testing the waters.’

I am sure I have not fully eased your mind on these matters, Paul, but I hope this is a good start.”

I don’t receive personal emails from Loebsack anymore, and I’m okay with that because I see him several times a year in a variety of settings. I have a type of accessibility to my congressman that is part and parcel of why we get involved in politics. As one out of 762,000 constituents, that is pretty good.

The third reason I like Dave Loebsack is the most important, what he could be. I don’t know how he got his initial committee assignments, but as far as I’m concerned, his membership on Armed Services and Education and the Workforce made the effort to elect him worth it.

Over the years, I haven’t agreed with all of Loebsack’s votes, especially on Armed Services. At the same time, ordinary citizens like me understand that we do not elect drones to the U.S. Congress, nor do we want to. It is precisely his outlook and process in the congress, combined with his committee assignments, that make him a strong legislator, one who will hopefully serve for many more years. As time goes by, Dave Loebsack will gain seniority on two committees that are critical to the future direction of our country. Committees whose work is important to the lives of everyday citizens where I live.

As we enter the 2014 election cycle, it’s time to stand up and get to work. I know what I’ll be doing– working to re-elect Dave Loebsack to the U.S. Congress.