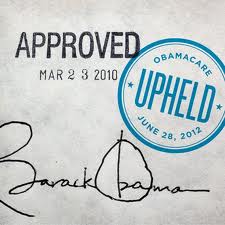 Like many, I worked hard during the post-911 Bush administration to elect a Democratic president. Investing a lot of myself in politics through the 2004, 2006 and 2008 election cycles, I’m not ready to give up on President Barack Obama now. Not even close. Including this time of implementation of the Affordable Care Act (ACA), something that has already made my individual health insurance policy better.

There are open questions about the changes. As answers are found, in almost every case, the news has been good. For example, my doctor is in the exchange and the exchange policy costs look to be substantially lower that my current policy, with better coverage. Even so, some don’t think the reality of the Obamacare roll out is as good as it is. (ACA = Obamacare, in case you missed it).

Heritage Action, the political action wing of the conservative Heritage Foundation wants us to be scared of the ACA, asserting a basic falsehood about it. “Scarier than any Halloween costume or ghost story, millions of Americans are receiving letters in the mail from their insurance companies saying that their health insurance will be dropped or that their premiums will skyrocket,” Heritage Action wrote in an email the day before Halloween.

By my read, it appears that policy holders, pretty uniformly, will get a better deal under the ACA. The impact of the ACA will be to level the playing field so that a health insurance policy has the basic provisions outlined by the new law, disallowing insurance companies from providing mediocre coverage.

Despite their noise, the naysayers provide no alternative to the ACA. What they must know is that as the actuality of the ACA is revealed, the more people will like it, rendering their scare tactics irrelevant. There is evidence insurance companies will like it too.

I was stunned by the rate increase we received from Wellmark Blue Cross and Blue Shield on our individual policy. At 6.8 percent it is the lowest annual rate increase we have had since first buying the policy in 2009. According to a notice from Wellmark, “the only increase to your premium will be an adjustment to account for the new federal fees and taxes required by the ACA.” What the insurance company is saying is that except for Obamacare, they didn’t need a rate increase this year. Can the reform measures really be that good for insurance companies?

There are still a lot of questions to answer about health insurance reform as the ACA rolls out. It is pretty clear that the president will take a hit in the polls over it, whether it is warranted or not. As I have written in my two previous posts, getting facts and working through them is essential, and there is no hurry to make a bad decision. So far, navigating the implementation of the ACA looks like clear sailing.