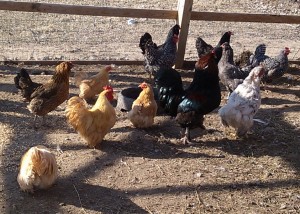 It is with a bit of trepidation that I venture into an expository piece about urban chickens. As people continue to move from rural areas to cities, attracted by jobs, apartments, and a type of society reliant upon the aggregation of diverse human interests, to raise chickens at home seems anachronistic.

By definition, city life eschews barnyard animals. Getting rid of urban chickens, pigs and cows was part of the rise of the public health movement. Whether intentional or not, urban society, by definition, replaced the need to produce one’s own food. Why else would so many people have left the farm but to take advantage of society’s mass production capacity? To seek a return of urban livestock is a throwback to an era that was not necessarily better.

Nearby North Liberty is considering an ordinance to allow city folk to raise chickens in their yards. This type of pursuit seems to be a material interest in pursuit of respectability among peers, rather than about nutrition. What makes the North Liberty proposal different is the requirement for neighborhood consent, rather than providing a courtesy notification of a chicken coop under construction. If passed, the ordinance would build community feelings, predictably on both ends of the love-hate continuum. Already there’s squawking.

At first reading, it is unclear to whom the ordinance would apply: whether or not the city would preempt home owners associations with a local address from making their own rules. The way the current ordinance is written, home owners associations could be more restrictive and disallow home chickens even if the city does permit them. Preemption has a long and controversial history in Iowa, notably as it applies to concentrated animal feeding operations where lobbying groups want control centralized in Des Moines in the self-interest of focusing their lobbying efforts with less resources. I’m confident the city council will work through this issue.

Some cried foul over the 25 foot rule (the coop, fowl house, or fenced pen area shall be a minimum of 25 feet from any property line), saying it was too restrictive, or the chicken coop location would be aesthetically challenged. This aspect of the draft ordinance serves my point that urban chickens are more like pets than food sources. More like a landscaping ornament or a window treatment for a view of lives where there is not enough constructive work to do.

The limit is four chickens, kept in a confinement facility— hens only. There were no instructions on how to determine if a chick was a rooster or a hen, but a Facebook friend resolved the issue by saying, “once a cockerel is old enough to crow, it’s big enough for the dinner plate.” This raises the issue of chicken slaughter. My grandmother lived on a farm, and knew the process well. During my time in French Army Commando School, we learned how to turn the gift of local partisan support into food for survival. Slaughtering animals for meat just doesn’t go with contemporary notions of city life. Maybe it should.

What I am saying is the idea of urban chickens is adjunct to local food systems. It is more an expression of bourgeois libertarianism in a consumer culture, than a revolution in local food production. Gil Scott-Heron famously wrote “the revolution will not be televised,” and we are hearing too much about regulation of urban chickens on the T.V., so a reverse logic applies: the local news is covering the story, so therefore it can’t be a revolution.

In the end, a community should have self-determination on how people live. I’m not against urban chickens, but don’t see the point. It seems like a lot of work and expense for a small number of boutique pet chickens. Why not buy the best eggs from the grocery store, or farmers market, or barter for eggs and save the money? And maybe get a dog or cat at the animal shelter, as they make better pets.