No Iowa Dairy for President Clinton 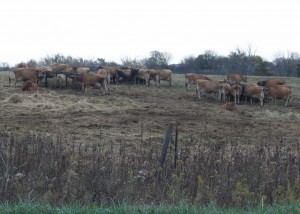 President Bill Clinton was on the Daily Show recently promoting his new book, Back to Work. He looks frail, but engaged in life. I got into an argument with a Hillary Clinton supporter during the run up to the 2008 Iowa precinct caucuses based on making this same statement. I said “frail” but maybe I should have said “less big and beefy.” He did look less big and beefy when I heard him speak at the Solon High School during the winter before the caucus. He still does, despite television’s ability to rejuvenate appearance.

Clinton is reported to have started a treatment for his cardio vascular system promoted by a doctor at the Cleveland Clinic and based on a whole food, plant based nutritional program. He lost weight, and presumably the treatment is repairing his cardio vascular system as it claims to do. The film Forks over Knives presents a general introduction to the treatment promoted at the Cleveland Clinic, and as Johnny Carson might have said, it is interesting stuff.

Forsaking meat and dairy products, as the Cleveland Clinic program requires, seems unlikely to catch on in Iowa. I sent organic dairy farmer Francis Thicke, who farms near Fairfield, an email with these questions,

“…what I am asking you as a dairy farmer is have you heard of this nutritional treatment for disease, and if yes, what are your thoughts about it? The large agricultural associations have attempted to marginalize the physicians who are developing this treatment, and I am wondering if you share the same concerns they do about people who point to detrimental effects of meat and dairy on the cardiovascular system?”

“Just yesterday I heard about the film Forks over Knives when I was up at ISU speaking to a couple of classes. I think it is very interesting. As a matter of fact, my wife and I have been trying to get a lot more veggies in our diet in recent years. If it is healthier, I think people should go for it. However, I doubt that the whole nation will go vegan overnight.”

At least one dairy farmer is not worried about a sudden shedding of dairy products from our lives. That is probably the norm. People’s habits, like drinking fluid milk or putting cheese on a taco are engrained.

Consumer products marketers understand consumer habits and what it takes to change or encourage them. For all the complaints about fast food, when a person eats a McDonald’s quarter pounder with cheese or an Arby’s roast beef sandwich with “horsey sauce,” it is tasty, and that tastiness is by design. Getting people to change habits by eating more plant based foods seems as likely today as it was when Francis Moore Lappe published Diet for a Small Planet in 1971. While revolutionary in concept, the idea of eating more plant based foods didn’t stick with the masses then, and seems unlikely to stick now.

What was bothersome about Forks over Knives was that it seemed like a too long infomercial about the treatment process. The expectation was a documentary, but what we got was case studies similar to what we might see on the latest edition of a Marie Osmond hosted Nutrisystem commercial. The Cleveland Clinic idea is pretty basic. Check in with a physician, get training in how to prepare food and then follow the plan. Sounds like something fitness promoter Tony Little might have come up with.

What had me thinking about President Clinton’s appearance, rather than the book he was promoting? Maybe it is that his wife, Secretary of State Hillary Clinton, is the deeper thinker of the two. Maybe it is the difficulty in taking anything that comes out of Comedy Central too seriously. More likely, it is the fact that a book about economic policy is far less interesting than a weight loss or health plan will ever be in modern American society, and perhaps that is the problem. We are consumed by our interest in things we can personally relate to, and the sound of another politician talking about economic policy is blocked out by his appearance and the knowledge that his health and diet plan might work for us too.

1 Response to No Iowa Dairy for President Clinton