Poster Nance Greggs on democraticunderground.com commented on Republican propensity of Republicans to go to a standard “both sides do it” when they get questioned about violent or treasonous behavior. This way of ducking questions was most recently seen as Congress member Paul Gosar was held to account for his vicious anime tweet aimed at Congress Member Alexandria Ocasio-Cortez and the President.

We also see this “both sides do it” in any conversation about the January 6th coup attempt. Usually they bring up bugaboos ‘enemies’ such as Antifa – which doesn’t exist – or Black Lives Matter, which is not a violent organization.

Someday soon, when a Republican starts with the “both sides do it” argument we may see the interviewer say “give me some specific documented examples, please.”

Oh, BTW, the only Antifa I ever heard of, my late father-in-law was a part of. He went calling on Hitler on Omaha Beach in Normandy June 6th, 1944. 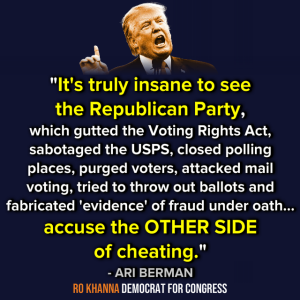 retired in West Liberty
View all posts by Dave Bradley →
This entry was posted in #nevertrump and tagged both sides do it. Bookmark the permalink.
Loading Comments...
%d bloggers like this: