Muscatine county has an exciting candidate for representative to the Iowa statehouse in Laura Liegois. House District 91 is in southeastern Iowa entirely within Muscatine county.

Laura Liegois offers a dramatic contrast to her opponent. Liegois will not be a rubber stamp vote. When you look at her background as the solid waste manager for Muscatine and now as a small business owner whose business is to bridge people to their government, Liegois is well grounded in how government is supposed to work for the people.

Liegois is also the mother of two and deeply involved in the Muscatine community. Her experience is well suited to bringing the constituents voice back to Des Moines. She will speak for her constituents because she is one of them.

Her opponent represents an old philosophy of government ruling the people. This is a philosophy that even the founders rebelled against. His voting record has been dismal as he has supported one bad bill to another from busting unions to underfunding schools.

“People in Muscatine County work hard and I want to work hard for them to have a better quality of life. This includes better paying job opportunities, health care, and the best education that will engage students in learning for a lifetime,” said Liegois. “It’s time politicians get back to the basics in the State Legislature–that means improving public safety, wages, health care and education.”

Laura is married to Jason, an educator, with two children, Jacob and Madeline. She was born and raised in Muscatine and has been an active volunteer and leader there her whole life. Laura serves the community through her involvement with the Greater Muscatine Chamber of Commerce, Salvation Army, Muscatine Community College Alumni, Muscatine Diabetes Project, and the Muscatine Boxing Club. She also volunteers with the Vineyard Church and Muscatine High School. Laura was named as One of 50 Faces of Volunteerism by the Governor and the Greater Chamber of Commerce of Muscatine’s Volunteer of Year in 2016.

“I am running to take the views of my neighbors in southeast Iowa with me to Des Moines. I have worked to improve the lives of the folks in Muscatine and I am ready for the next step to fight for them at the Iowa Capitol.”

The choice is stark here. For those who want a true representative for their views, Laura Liegois is a great choice. 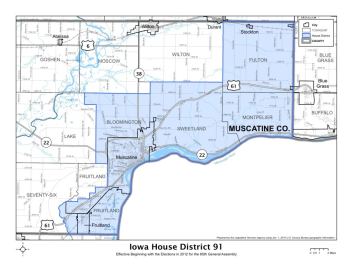 retired in West Liberty
View all posts by Dave Bradley →
This entry was posted in 2018 Election Campaign, Blog for Iowa, Iowa Legislature, Iowa legislature 2018 and tagged HD 91, Laura Liegois. Bookmark the permalink.
%d bloggers like this: