Iowa’s Joni Ernst One Of Top Recipients Of NRA Support

*Update 02-16-18:  Doubling down on her pledge of allegiance to the NRA, Joni Ernst repeated this absurd talking point after the mass shooting with a military style automatic weapon this week in a Florida high school.

She’s sticking with the NRA, folks. This will never change as long as she is in office. 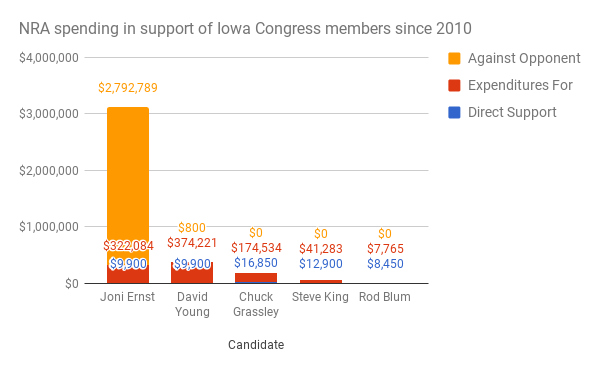 Data via the Center for Responsive Politics

The five GOP members of Iowa’s congressional delegation have consistently opposed proposals to strengthen regulations against guns including ones for stronger background checks. They have all earned “A” ratings (or “AQ” ratings, an equivalent rating based on questionnaire responses instead of votes) from the National Rifle Association, which has spent nearly $3.8 million to help them remain in Congress since the 2010 election cycle.

On Monday, in the wake of a Sunday night massacre claiming at least 58 lives at a concert in Las Vegas — the worst mass shooting in US history — they offered thoughts and prayers to the victims and their families. Such condolences have become routine after deadly shootings but, thanks in large part to the aggressive lobbying by the NRA, rarely do the incidents result in meaningful policy changes gun control advocates want.

Ernst is one of Congress’ biggest recipients of NRA support in recent years — over $3.1 million. Most of that came when she first ran for the Senate in 2014, when the NRA dropped nearly $2.8 million in independent expenditures including TV ads targeting her Democratic rival, then-Congressman Bruce Braley.

Congressman David Young, a former Grassley aide, has received $384,921 from the NRA since 2014 in the form of direct contributions and independent expenditures.

Congressman Rod Blum, who’s received a more modest $16,215 in support from the NRA since 2014, tweeted a clip of President Trump’s response to the massacre instead of offering thoughts and prayers. The NRA was one of Trump’s biggest supporters; despite Trump’s claims that he ran a self-funded campaign, the NRA spent $30.3 million on his behalf.

Congressman Steve King has yet to issue a statement on the Las Vegas massacre. But he’s also a reliable ally of the NRA, which has given him $54,183 in direct and independent expenditure support since the 2012 election cycle. 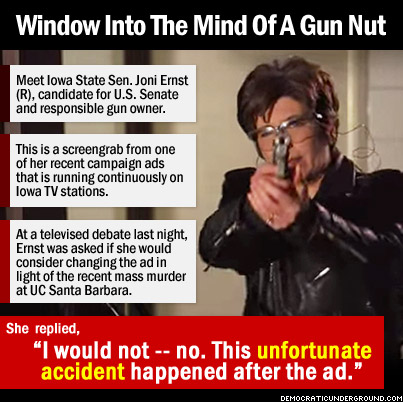