Posted on May 12, 2007 by bfiacarolinevernon

On Thursday, May 10th, a coalition of concerned citizens representing various organizations came together to hold a press conference in front of Senator Charles Grassley’s downtown Davenport office. The purpose of this press conference was to urge the Senator to reconsider his vote on repealing the provision within the 2003 Medicare Modernization Act that forbids Medicare from negotiating prescription drug prices. Coalition groups included organizers and members of Iowa Citizens Action Network (ICAN), Working Families Win (WFW), Illinois Alliance for Retired Americans (ARA), Quad Cities Federation of Labor (QC-Fed) and Progressive Action for the Common Good (PACG).

Unfortunately, the funeral of Katie Soenksen, the young soldier from Davenport (one of the most recent victims of the Iraq war), was held at the exact same time of our scheduled press conference so we had no press at the event, although Charlie Wishman of ICAN was interviewed on WVIK, a local radio station. Although disappointed at the lack of media coverage, we accomplished exactly what we set out to do; to let Senator Grassley know that his vote forbiding Medicare to negotiate drug prices is unacceptable. 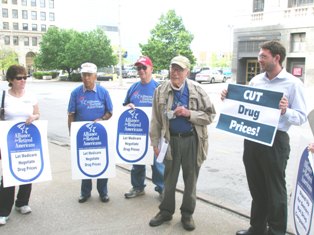 I hope seniors everywhere are paying attention… our senior Senator seems to believe it is more important to protect drug company profits than to protect Iowa’s medically needy and senior citizens who depend on life-saving medication. The costs of some drugs are so outrageous that many are forced to either go without their medication or forego paying other bills. Meanwhile, drug companies are making huge profits at the expense of the elderly and infirmed. 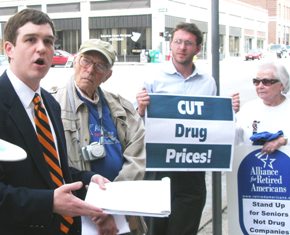 Based on a recent report by the Institute for America’s Future (read the whole report at: www.ourfuture.org), …”repealing the provision within the 2003 Medicare Modernization Act that expressly forbids Medicare from negotiating lower prescription drug prices could save American taxpayers $30 billion a year.” This paper also examines the savings from the Veterans Administration to show that Iowa residents could save $399 million each and every year if Medicare was allowed to negotiate for the same low prices that are obtained by the VA.

The potential annual savings from negotiating are also evident from looking at several particular drugs. Merck’s Zocor and Pfizer’s Lipitor are both top-selling prescriptions that, if sold at the VA’s negotiated price would save U.S. taxpayers and seniors more then $2.8 billion annually, enough to fully fund the shortfall states face with the State Children’s Health Insurance Program (SCHIP). To give you a glaring example of the difference in cost, refer to the comparison below:

This is so outrageous… we cannot continue to allow the well-being of our most vulnerable citizens to be held hostage to the almighty dollar.

I don’t know how Senator Grassley or anyone else can rationalize and then justify this kind of exploitation. Senator Grassley has received hundreds of thousands of dollars from the pharmaceutical industry. It’s time he gets his priorities straight and chooses to represent the good people of this state instead of drug company profits. Please call Senator Grassley and tell him exactly that!